The announcement made on December 06, 2017 by Donald Trump - President of the United States of America - to officially recognize Jerusalem as the capital of Israel, and his intention to move the USA embassy from Tel Aviv to Jerusalem, has caused significant amounts of protests throughout the Middle East.

​  Twins Tours managers have been monitoring the reactions to this announcement on various news sources - International, Arabic, Israeli, and American media outlets.  Twins Tours tour guides - Andre Moubarak and Tony Mubarak - have been guiding tour groups in both Israel and the West Bank every day for the past week.

We have noticed a discrepancy between the international media's reports and what is actually happening on the ground in Israel and the West Bank.  So far, the demonstrations & protests in the Jerusalem region have only taken place in small pockets of the city, mostly in Muslim neighborhoods.

These demonstrations have been small in size, dispersed easily & quickly by the Israeli police & Israeli army, and they have not resulted in injuries or violence beyond rock throwing.
The demonstrations in Bethlehem (West Bank) have been stronger, but only resulted in violence in the area around Rachel's Tomb, and have been decreasing, and things are getting more quite every day.

Hopefully this is helpful
Andre
Posted by Unknown at 12:55 AM No comments: 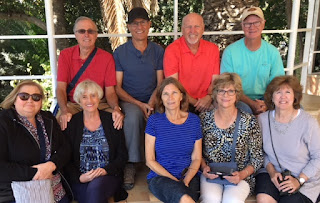 Dan and I want to thank you for giving our team such an amazing experience. Every detail exceeded any expectations we may have had. We were able to completely immerse ourselves in the trip as we were not in charge of the details you so fantastically arranged. We know there is a lot that goes into providing transportation, accommodations and meals. It takes a lot of people to do that. Also, all of the sites you arranged for us to see was truly remarkable. Especially how many we were able to experience with just our little group of 9. We rarely fought the hoards and it is because you all orchestrated that for us.

The length of time, locations and variety of the places we stayed were so wonderful. Food p
henomenal. Jaffa was a total bonus surprise. Although the team is still bitter about our big beautiful room, wine and chocolates. We have gotten together several times to download both our time in Jordan with the refugees and Israel. It seems we always end up in an overwhelming sense of gratitude for our Israel from a Palestinian perspective adventure.
We pray the Lord will richly bless all of you. Tony and Andre-you were phenomenal guides. We know you,  but not the others who were involved. So thank you to all of you.

God bless you. Peace in Jerusalem.
Love from Rochelle
Posted by Unknown at 10:27 PM No comments: