Finding Peace amid War
My first and second years at university, when I was in my late teens, were marred by constant riots and clashes between stone- throwing students and Israeli soldiers. These were the days of

the First Intifada, which lasted nearly seven years until Israel and the Palestinians signed the peace agreement known as the Oslo Accords in 1993.
During the worst episode, on a day when riots broke out all over the West Bank, Israeli armed forces parked a huge tank outside the main gate and fired tear gas cylinders through the windows into the classrooms of Bethlehem University. Everywhere you turned, people were passed out on the floor or struggling for breath. At one point I had to jump from a high window and run to safety with a friend, who got shot in the leg by a sniper standing on top of a telephone box. We hid until all was quiet and the army, deciding it had made its point, retreated.

Such violent conflicts were the norm during my studies. I hated university life. I couldn’t see a future, I felt depressed, and I won- dered if any of it was worth the effort. And then one day . . .

Alive for the First Time
The riots had started again as usual when I entered the university cafeteria and spotted a group of students holding hands and pray- ing. I was shocked. “What are you doing?” I said. “Run away. No one is here.” But they just closed their eyes and continued to pray.

I decided to leave those crazy people by themselves. They were clearly praying in the wrong circumstances.
Yet day after day, whenever I entered the cafeteria, I saw these same students gathering at the same spot. And the amazing thing was, they were happy. Their eyes were full of joy. I had never seen students like them before. “These people are weird,” I thought. “Chaos and danger are all around, stress is high, exams are tough— and still they are happy.” Their attitude was so different from the anger and depression that was all around me.

So one day, out of curiosity, I gathered my courage and asked if I could join them. They welcomed me immediately. There were six of them, boys and girls, and the girls were so beautiful. They were from Gaza, they said. That surprised me. Gaza had become the symbol for the First Intifada, and students from Gaza were the most active in the riots.

“I’ve been watching you for several months now,” I said. “You’re always so happy. What’s the secret?”
One of the girls replied, “We’re Christians.” She had the most beautiful blue eyes; I couldn’t help staring at them. “I am a Chris- tian too,” I said, “but I am never happy like you. If there is some- thing more than what I know, please tell me.”

“You have to accept the Lord Jesus Christ in your heart, and the Holy Spirit will enter your life. He will change the past and renew your life. You will become a new person, washed in the blood of Jesus.”
“I want that for my life,” I said.

They called over one of the guys, who just happened to be a neighbor of mine in the Christian Quarter. He took me to an empty room and we sat down. He said, “Repeat these simple words after me: Jesus Christ, I invite you to enter my life. I surrender everything to you. Forgive me for my sins and come and wash me with Your blood. Holy Spirit, I invite You to live inside me.”

It was the shortest prayer I had ever made, but when I had fin- ished I felt complete peace and love in my soul. I felt so safe and happy! It was the Holy Spirit living inside me, but I did not realize it at the time.
I had to tell my twin brother, Tony. Jesus had changed my life! I was joyful and shining, and he needed to have this too.

Tony was skeptical. He said I had become a born-again Chris- tian and figured I’d been brainwashed. In the Middle East, Amer- ican churches try to influence traditional Christians to turn from their faith to new religions, even cults. So he refused to talk to me.
But I was so full of joy that I did not care. I joined my new fellow Christians almost every day, hanging out with them. And I asked my neighbor to speak to Tony as he had spoken to me. He did—and my twin brother also became a different person in the Lord Jesus Christ and immediately began to change. 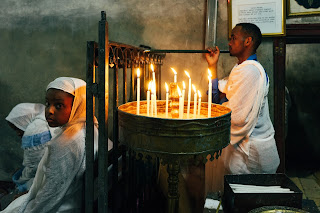